Serenity on the Shoreline 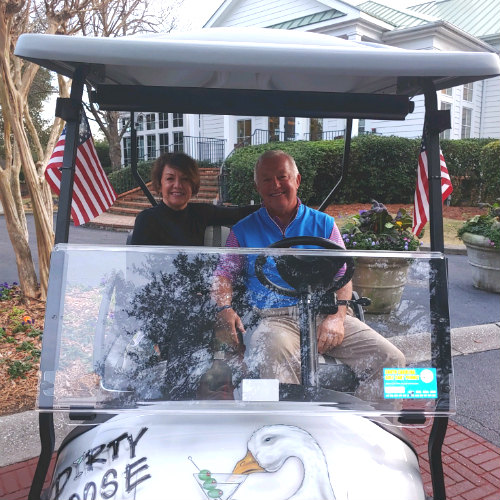 Life on Pawleys Island is a Walk on the Beach

Bill and Bonnie Gillespie, full-time residents and members at The Reserve on Pawleys Island, South Carolina, are decidedly “beach people.” The Reserve’s relaxed, Lowcountry setting, championship golf course designed by Greg Norman, and private beach access sold the Gillespies on relocating full-time to one of the golf villas across from the clubhouse. They have loved every minute of their time here since moving in one and a half years ago. Their son, Blake, who lives in Raleigh, N.C., has also enjoyed spending time at Bill and Bonnie’s new home any chance he can get away for a weekend.

Hitting the links at The Reserve’s private golf course several times a week is typical for Bill, though he still works full-time and travels for work quite a bit. Bill was fortunate enough to play on the winning team in the McConnell Golf 11th Annual Ryder Cup in 2018 — the first time The Reserve had ever won the tournament. Making good use of his reciprocal access, Bill also loves playing at Raleigh Country Club with his son when visiting Raleigh. Bill takes advantage of other opportunities to play sister properties such as Country Club of Asheville and Sedgefield Country Club when traveling for business.

In addition to playing golf, the Gillespies love their beach time. As the nearby public beaches can become very crowded, especially in the summer, their family appreciates that as members of The Reserve, they have access to Litchfield by the Sea’s pristine private beach. They enjoy taking a quick golf cart ride to the large parking area next to the beach access, and spending time on the uncrowded stretch of strand — which they take advantage of daily. In fact, their favorite time of day is early in the morning when they wake up and hop in the golf cart with their coffee and dogs in tow. Starting their day together with a walk on the beach sets a relaxing tone to the couple’s laid-back Pawleys Island lifestyle.

A typical weekend for the Gillespies looks like this: Wake up early, take their coffee on a 45-minute beach walk with their dogs, head back home to get ready for the day, enjoy a round of golf, and then eat lunch at the club. In the afternoon, they’ll enjoy a cocktail and a relaxing dinner at home before taking an evening ride on their easily recognizable golf cart named “The Dirty Goose” to end the day. 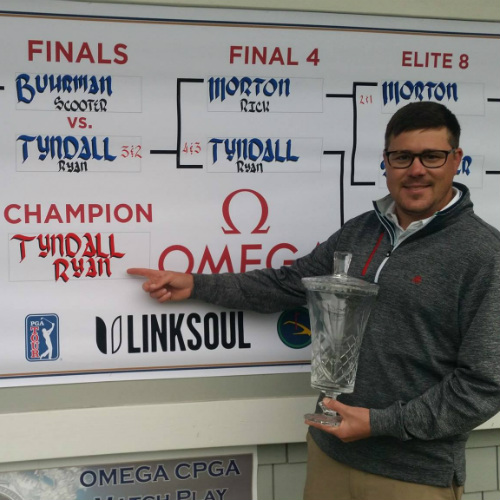 For pros at McConnell Golf, a good scorecard is a job requirement.

A few of Ryan Tyndall's fellow golf professionals jokingly said they wanted to buy him a photograph of the 17th and 18th holes at Wilmington’s Eagle Point Golf Club.

In fact, Tyndall didn’t even visit Eagle Point’s 16th hole until his final pairing of the Carolinas’ most prestigious match play event, where he lodged a 3&2 victory over Scooter Buhrman of Champion Hills Club.

Playing in cool, wet conditions, the 33-year-old Tyndall rose from the No. 11 seed to claim the tournament’s $3,000 first prize.

And bear in mind, these were no slouches Tyndall was besting. He posted 4&3 victories over a trio of the CPGA’s best players — Larry George of River Landing Country Club in the opening round, Oak Island Golf Club’s Steve Isley in the quarters, and Rock Creek Country Club’s Rick Morton in the semis — to reach the championship tilt.

“It was awesome,” says Tyndall, who attended the University of Georgia and grew up competing against current PGA Tour pros including Brian Harman, Kevin Kisner, Russell Henley, Harris English, and Hudson Swafford.

“There was no pressure because I was playing so well — I never made any mistakes. You can be very at ease when everything is going your way,” he recalls.

Tyndall considers his playing performance to be an important element of his job with McConnell Golf.

“Mr. McConnell and Brian Kittler look for good players,” Tyndall says. “For me, I enjoy playing, I love to compete. I try to play and support the CPGA section in every event possible. Whether it’s team events or sectional championships or even taking members to Pro-Ams, I think it’s important for us to make a showing.”

Often, Tyndall says, McConnell Golf members reach out to him during the tournaments via text or social media to inquire how he’s playing and wish him good luck.

“It gives the members something to talk about when we get home,” Tyndall says. “They enjoy asking how you’re playing and following you online, which is always fun. I think they take pride in seeing one of us — not just me but all McConnell Golf pros — play well and succeed.”

Club members also enjoy knowing that their golf pro knows what they’re talking about — and that they have the opportunity to not only learn from good teachers, but accomplished golfers as well.

“I believe the membership takes pride in having professionals who not only play good golf in tournaments and represent their club, but are also available to play with them on a weekly basis,” says Brian Kittler, vice president of golf operations.

“You’re so much more valuable to your membership if you’re a good player,” says Donald Clement, The Reserve’s director of golf, who ranked as one of the CPGA’s best players for many years. “The membership respects you because you’re a club professional. They take lessons from you. If you’re a good player, they understand that you can teach too. You understand the golf swing a little more if you’ve put your game on the line and posted some scores. Being a good player is a huge part of the job.” 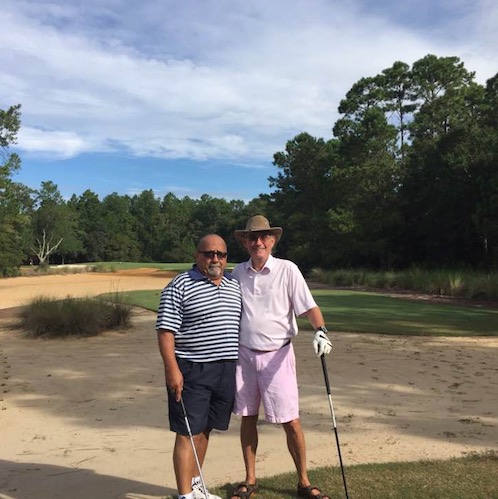 When Dennis Wahl retired as a Vice President at Merrill Lynch, playing more golf was at the top of his to-do list. “I’ve been golfing since I was 30 years old and I’ve always had a passion for it,” says Wahl, who joined The Reserve in 2012. “I was able to retire a year early, at age 64, and now I’m having the time of my life.”

How do you find the time to play so often?

It helps that I’m retired, but I always played a lot even while I was working. As of this past February, I’ve played 44 rounds this year. And counting. I’m on pace for another 300 rounds this year. I can play 18 holes in three hours ... four hours, tops. I like that a great deal.

What part of your game have you been able to improve the most over this past year?

I’ve gotten better because I’ve played a lot. I walk 98 percent of my round. Walking has made me a better golfer. I’m in better shape. I think the game was made to be walked.

What’s the most memorable round you played in 2016?

Not shooting 72 in that round that I shot 73! I missed two 5-footers. Could’ve easily been 71. That’s as heartbreaking as it gets.

Who golfs with you most often? And can they keep up?

There’s a group of us at The Reserve called The Wheaties, and we play once a week. We play from the tournament tees at 6,500 yards. The Reserve, from those tees, is very difficult. But everyone in this group can hit the ball. Everyone in this group has, at worst, handicaps of 12 or 14. I’m an 11. It’s nice to play with these guys. Almost all of us are in our 60s or 70s.

I go into the clubhouse, have lunch or a beer. Every time I play, I eat lunch there. A member of a club needs to support their club. It’s about more than just playing golf.

Experience of a Lifetime 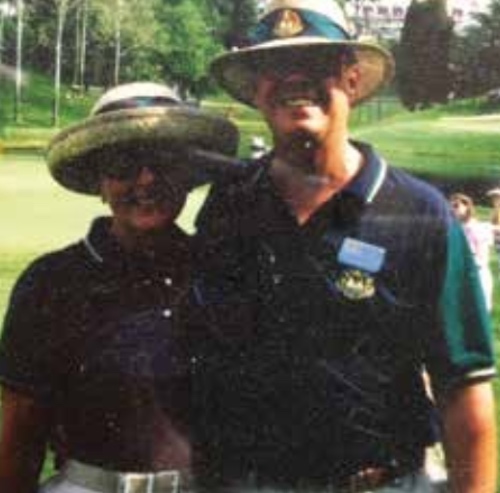 As we ramp up for the Wyndham Championship, members recount their most memorable PGA tournament moments

"Rick and I were USGA marshals at the 1997 U.S. Open at Congressional Country Club (pictured at right). At that time, tournament marshals walked inside the ropes, and it was a thrill for both of us. Since then, Rick became a USGA Rules Official and Competition Committee member.

Golf is the cornerstone of our philanthropy and we both serve on the Executive Committee of the SCGA and SCJGA, respectively.